One of the cool sampling technologies we have here at AUT is Stir Bar Sorptive Extraction [SBSE]. The stir bars are little magnets coated with a layer of PDMS. You pop them into a liquid sample sat on a magnetic stirrer and over a period of a few minutes to an hour or more they will absorb any interesting organic compounds, even ones present at trace amounts, extracting and concentrating them from solution so that they can be analysed by GC-MS. In order to get your compounds off the stir bar and into the GC-MS you have to heat them to 300°C under an inert gas. Our Gerstel multipurpose sampler has a purpose-built doohicky to do this called a Thermal Desorption Unit. The heat vapourises the organic compounds from the PDMS trap and a flow of helium carries the organic compounds onto the GC column.

This is all very cool but before you can use the stir bars you need to thermally condition them to clean them of contaminants. The stir bars pick these contaminants up from anything they come into contact with. Its what they’re designed to do. However, it’s essential to be able to distinguish between contaminants the stir bars have picked up by accident and the interesting compounds I’d like to analyse. The thermal conditioning process releases any contaminants that might confound your analysis before you put the stir bars into your samples so it is an essential precursor to sensitive analysis. The problem is it takes up instrument time on the GC-MS. A lot of instrument time. The manufacturer recommends (pdf) that you condition stir bars for two hours prior to use. Analysing a single stir bar takes about an hour so total instrument time for one analysis is three hours.

I wanted an alternative way of thermally conditioning the stir bars that wouldn’t take up valuable instrument time. This would require some sort of enclosure that can be heated to 300°C and filled with a flow of inert gas. It has to be a flow to remove volatile contaminats as they evaporate. I have several other gas chromatographs in my lab besides the GC-MS which can easily reach 300°C so all I needed was an enclosure I could connect to a gas supply and put in there. I considered designing one using CAD and asking my engineer buddies to machine it using their awesome CNC mills. However, that would take time and effort. Instead I found aluminium enclosures for sale from RS that looked perfect and they only cost a few dollars. I drilled a 5mm hole through the side so that I could screw an HPLC compression screw through it. I then passed a piece of 1/16″ stainless HPLC line with a large internal diameter through the screw, added a ferrule and threaded a steel union onto the end on the inside so that the screw head was tight against the outside wall of the box and the union against the inside. I actually had to add a washer to the outside to get a snug seal. Passing gas through the line would now vent into the box through the hole in the union. The seal around the rim of the lid wasn’t particularly tight but it was good enough to allow me to pressurise the chamber with just a few KPa of nitrogen. You can see a video of gas  bubbling out of it underwater here. Here’s the box sitting inside the GC oven:

GC ovens have ready-made ports in the side specifically so that you can add peripherals so I ran the 1/16″ line out of one of these. I had to make a small cut in the outside insulation to pass the line through.

On the outside the 1/16″ line was connected to a 1/4″ piece of HDPE gas line that ran to the regulator on the gas cylinder in my rack. I didn’t use the expensive, instrument-grade nitrogen that I use to run the GCs for this purpose, of course, but cheap industrial-grade oxygen-free stuff. Even better is that I’m not using the ultra high purity helium that the GC-MS runs on either. 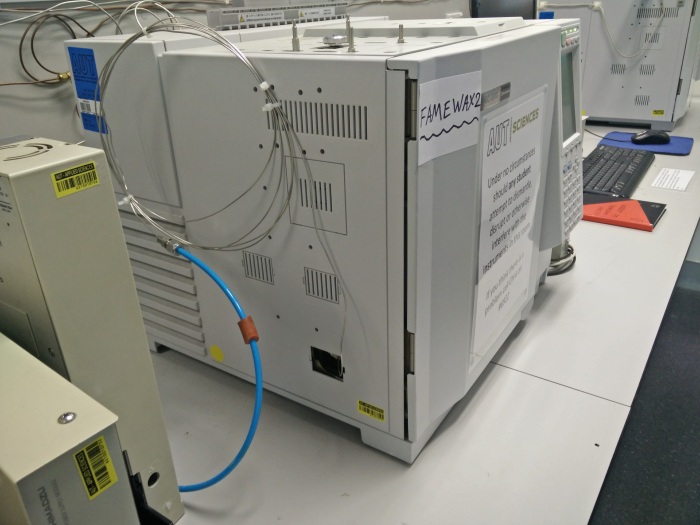 Analytical chemists will notice my stupid mistake immediately. I’ve located the box in a GC with a wax column. Wax columns are very useful but they can’t tolerate temperature above 250°C. Derp! Tomorrow I will move it to another GC so I can hit the required temperature. I’m going to try conditioning some cheap, PDMS-packed-tube traps first before I try the expensive stir bars just to make sure it doesn’t destroy stuff.