Skip to content
HomeHacking bathroom scales with an HX711 breakout

Hopefully this will be the start of a series of posts on the Internet of Bees, or the #IOBee. In case you didn’t realise, this is a play on the Internet of Things, or IoT. My intent with the IOBee is to document my application of some basic sensor technology to monitoring the health of bee hives.

There is an excellent writeup here of a conversion of a set of luggage scales to a real-time bee hive mass monitor. I have been wondering if I can do the same thing to monitor the mass of experimental bee hives in some research I’m planning looking at the effects of neonicotinoids upon honey bee colonies. In order to test this out I ventured onto eBay and bought a couple of HX711 breakouts, which you can get for just a couple of dollars. 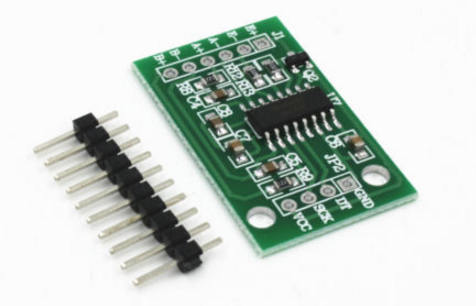 I also bought a cheap set of bathroom scales from the Warehouse, despite the advice on MakeZine, which advised not to skimp. I intended this to be a proof-of-concept so I wasn’t going to be spending big bucks just yet.

This turned out to be an excellent hacking subject. After taking the back off I found a circuit board carrying the integrated circuit, some components and some wires. 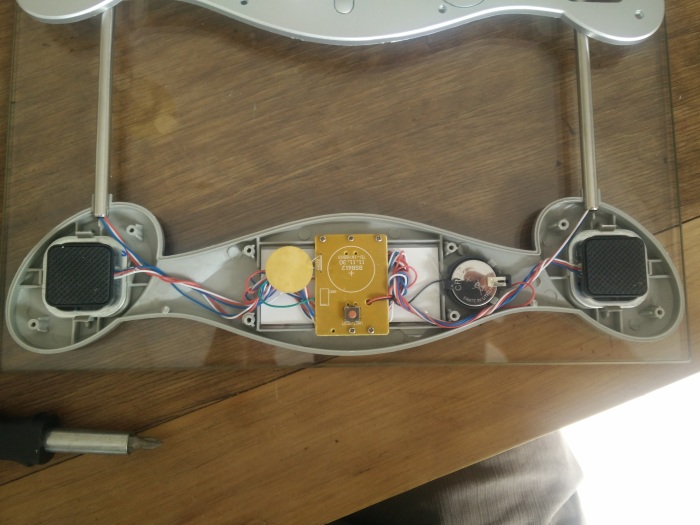 The two black pads you can see are the rubber feet on the bottom of the load cells. I prised one out to show you the other side.

The red white and blue wires coming from each of the four load cells needed to be joined together carefully according to the first image in this excellent post on StackExchange that I located after a modest amount of googling. I also found this how-to from SparkFun to be informative.

Once I had soldered the blue and white wires together to mimic the pattern shown and the red ones to the appropriate pads on the HX711 breakout I was left with this: 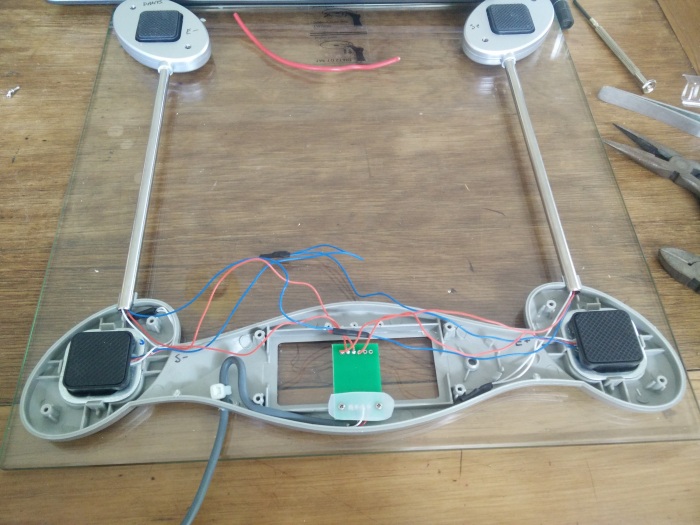 I also soldered the wires from a length of USB cable from an old mouse to the other side of the breakout. The four tabs and their wires were to VCC (red), GND (black), CLK (white) and SDA (green). I drilled a hole in the plastic chassis to pass the cable through and put a cable tie around it on the inside to prevent the wires being pulled off the board. The mount holes in the breakout board ( I love mount holes!) happened to be just the right width to allow me to screw it to the chassis through two of the holes that the original PCB was mounted on. The white thing is a piece of polyethylene milk bottle wall that I cut out and used to insulate the connections of the breakout and to hold it down as the screw heads were nearly as small as the holes. This arrangement allowed the breakout to be seen through the glass window where the LCD used to be. A nice touch. 😀

Having wired everything together I needed an electronic brain for my creation to talk to so I hooked it up to the Arduino Nano I’ve been using as a receiver for my solar-powered, wireless monitoring testbed. Ignore the BME280 and the NRF24 coming off it. VCC went to 5V, GND to GND, SCK to D4 and SDA to D5. 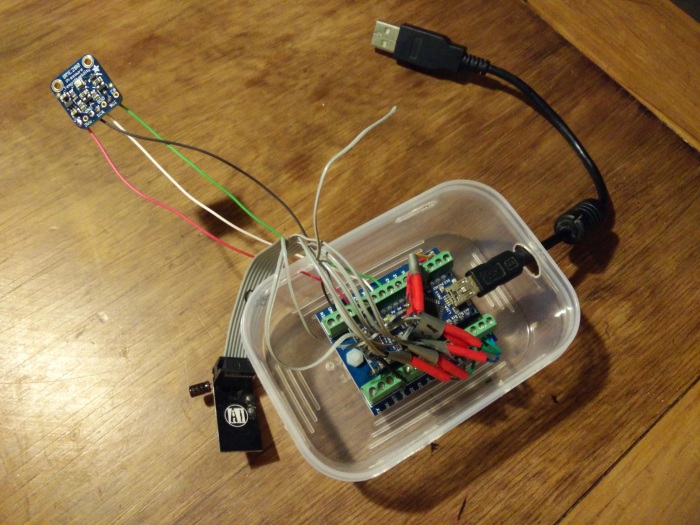 I downloaded the HX711 library written by bogde (thanks!) and also the HX711 breakout sketches from the SparkFun how-to linked above. I was pretty impressed to see numbers appear straight away on the serial monitor although this turned to mild disappointment when I placed a mass on the scales and the number went negative! Apparently I had got the polarity of the signal wires the wrong way around. 😦

Five minutes of soldering later I was back reading numbers and this time they went up with the mass on the scales. According to the instructions on the test sketch I kept adjusting the calibration factor until the scales read the correct mass for the object I’d put on it. Then came the acid test: now it was calibrated, would it get my mass right?

As you can see it worked almost perfectly. And I am somewhat overweight.

This gave me three decimal places instead of one and significantly more information. I was particularly pleased to see that these scales read quite consistently. The numbers for my weight jump about quite a lot because I wasn’t too worried about keeping still to get a stable reading but when I placed a fixed mass on the scales the second decimal place was pretty stable and only the third flicked up and down by 1-3 units. These scales were advertised as being accurate to +/- 100g so my results indicate I can do much better than that. And that’s without any of the tricks you can use with microprocessors to improve the accuracy of otherwise low resolution tools, such as polling them and taking a moving average.

More on the application of this very cool hack another day, once I’ve validated the calibration as described on MakeZine.

7 thoughts on “Hacking bathroom scales with an HX711 breakout”